Home • How To Open A Coconut? Survival Life Hacks

How To Open A Coconut? Survival Life Hacks

How to Open a Coconut

Coconuts are one of nature’s wonders. With ultra beneficial properties, there are so many uses for this versatile fruit – no, the coconut is not a nut, but calling it a cocofruit sounds silly, so we’ll go with the norm.

So, just how useful are coconuts, and how do you open them?

Getting into a coconut is easier than you think.
Before you crack the shell, it’s a good idea to drain the coconut water so that it’s not wasted. To do this, locate the three ‘eyes’ at one end of the shell, and with a knife, or screwdriver, test each eye to locate the ‘softest’ one, then make a hole and drain the water into a bowl.

Once you’ve drained the liquid, wrap the coconut in a towel, after you’ve found the ‘join’ line around the fruit. Once wrapped, give several firm taps with a hammer around the line, and the coconut will crack. Carefully pry it open and enjoy.

Uses for a Coconut

Although the oil can be bought and stored as a separate product, making your own oil is simple and you gain the benefits from the rest of the fruit by storing the whole thing.
To produce coconut oil, the meat needs to be removed from the shell. Chop or shred it into small pieces, and either place in a dehydrator for 24 hours, or spread the chunks on a sheet and pop into the oven, set to the lowest temperature, for 8 hours.

Once dried, put small amounts of the chunks into a juicer in order to separate the fibre, oil and cream. Once you’ve juiced the pieces, repeat the process to ensure you capture every drop of oil. Pour the liquid into a jar and seal. Leave it in a warm place for 24 hours, and you’ll see that the cream settles at the bottom, while the oil is on top. Use a spoon to carefully remove the solidified oil and store in a separate container.

Coconut oil is great for cooking with, protecting skin from harmful UV rays, and healing sore skin. Being antibacterial, swilling with coconut oil can improve gum health as much as using a proprietary mouthwash. Small amounts of coconut oil can decrease hunger pangs, and provide energy, and when dabbed onto wounds, can speed up the healing process. Coconut oil can also act as an effective fly repellent, fuel a lamp, and loosen bike chains – is there any end to its usefulness for prepping?

The white creamy flesh of the coconut can be eaten raw, or shredded and added to recipes. It’s tasty, full of nutrients and will last for a couple of days in a cold box or refrigerator.
Once dehydrated, the meat can be ground to create coconut flour, a gluten-free, healthy alternative to conventional flour.

As with the oil, this can be produced very simply. First, remove the coconut meat, shred it, and, in a bowl of water, hand squeeze it as hard as possible. Alternatively, pop the shredded coconut and water into a blender; the latter process produces a thicker milk.

This extremely nutritious drink is the clear liquid which fills the coconut’s interior, and is best accessed by drilling into the shell and pushing a straw into the hole.
The water has other uses, too. It’s great for restoring electrolyte imbalances, has antibacterial, and antiviral properties, and can, astonishingly, be used to dissolve kidney stones, or for an emergency transfusion, due to its ability to mix with blood.

Once you’ve harvested everything from the fruit, the empty coconut shells make excellent fire fuel, burning for much longer than the equivalent amount in traditional timber. They are also great for planting seeds or delicate seedlings, in. And kids love them!

Is it any wonder, then, that with so many benefits, including some pretty astounding ones, preppers are stocking up on the supremely useful coconut. 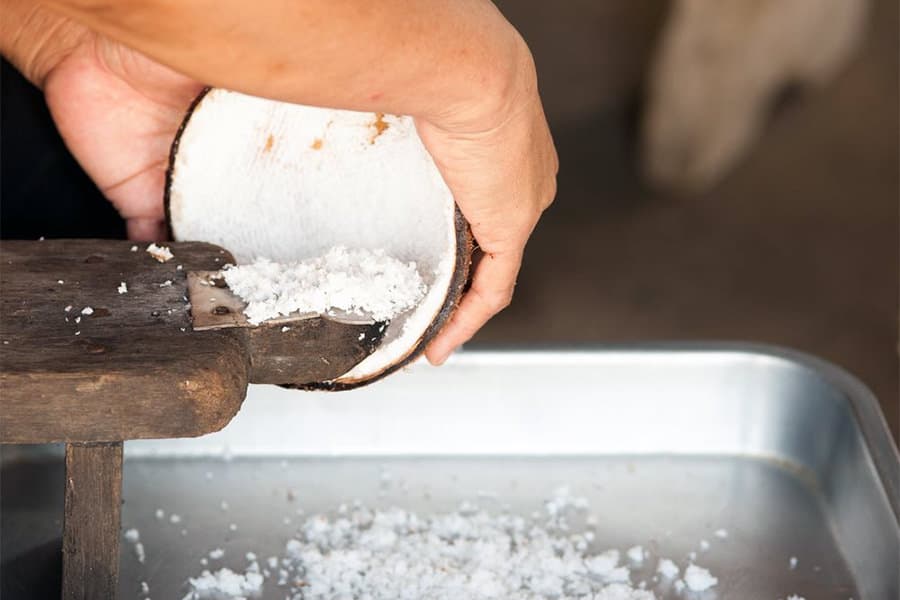 Our Top Tips on Preserving Food in Survival Situations